My biggest challenge as a first year teacher was not classroom management. It was not keeping up with lesson planning or grading.

My biggest challenge was not responding to questions and complaints from parents  or staying cheerful at long faculty meetings.

No, my biggest challenge was encouraging my students to think — what educators these days call developing a growth mindset.

As someone who loves making kids happy and comfortable in the classroom — and someone who has never been shy about sharing what she knows, it is hard to describe how difficult it was to bite my tongue and not immediately reply when students demanded:

“Just TELL us the answer!”

And, my favorite from the last week of school, “FIX THIS!” when a capable eighth grader’s Google Slides project went haywire.

It would have been an easy way to keep stress levels down in my classroom. Just provide the answer (or fix the problem on the computer screen) every time a student struggled. But that’s not in a student’s best interest.

Learning is a struggle — but a good one

Stanford University psychology professor Carol Dweck coined the term growth mindset and presented arguments for praising students who make the struggle to learn in her 2006 book Mindset: The New Psychology of Success.

She encourages parents and teachers to praise students when they work hard and ask them how they feel about themselves afterward.

The idea is to help students value the process of learning and feel good about themselves when they have figured out something on their own — not just memorized correct answers from a textbook.

As a world language teacher, I wanted to students to value the process of figuring out new words in Spanish based on vocabulary they already knew in Spanish and in English. I also wanted them to feel good about being able to create new sentences in Spanish with rules they had learned about nouns, adjectives and verb conjugations.

At the start of the school year, I discovered I had my work cut out for me. Students wanted to memorize passages from the textbook and phrases that I wrote on the board. They wanted those exact passages and phrases to appear on quizzes and tests.

“WHAT?? We didn’t learn this!” I heard over and over. No, I would say. You did not have that exact sentence but you learned something similar. Apply what you know.

As I said. It was hard not to just break down and just tell students the answers. All of the kids I taught were smart and adorable. I wanted them to like me and like my class.

Learning how to learn a world language

I had to continually remind myself that learning to think about how to learn Spanish would benefit them more than an immediate A on a quiz.

I wasn’t successful getting all of my students to embrace the passion for learning how to learn a world language. But I know I reached many of them.

More than 90 percent of the eighth graders I taught scored well enough on an end-of-year exam to earn a credit for Spanish 1-2 — a class ninth graders normally take the first year of high school.

I feel like I scored big too. I will be starting a new job at a magnet traditional public school in July. I look forward to teaching the growth mindset at my new school.

It’s been three days since my first semester as a middle school teacher ended. I’m still a bit overwhelmed.

Not by the amount of work it took  to get missed test and homework made up and grades in. Not by the zany pre-holiday behavior of the 160 or so 12-, 13- and 14-year-olds if my Spanish classes.

No. I’m blown away by the cards and notes of gratitude many of my students took the time to write at the busiest time of the year.

At a faculty meeting the week before winter break, I asked the veteran teachers I sat with what they liked receiving the most from students at holiday time.

All emphasized that they did not expect anything. Our kids, after all, connect with six or more adults at the school when you count coaches, counselors and others who interact with students and getting something for everyone would be too much for many families.

But I teach in school attended by middle- to upper-middle class kids and, at the start of the year, a couple of teachers had whispered to me “wait until your mailbox is stuffed with gift cards at holiday time.”

So I pulled out my newspaper interviewing skills and pressed them a bit. The men confessed to liking liked things like amazon.com  gift cards and the women said that for anything from bath and beauty stores was considered a windfall. Starbucks gift cards were welcomed by everyone.

But no one mentioned what I found to be the best part of pre-holiday week: Cards from students. Maybe they are just taken for granted by experienced teachers who receive kind messages about their work year after year.

But the notes of gratitude certainly surprised me. Especially after a semester of tough evaluation comments from school administrators and negative e-mails from parents about subjects ranging from the way I grade to my classroom management style.

— Thank you for teaching me Spanish!

— We will be requesting you next year!

— You have been such a big help!

— I am happy to have you as a teacher!

Several even put the traditional Spanish upside down exclamation marks in for emphasis.

In an age when people have cut back on cards even to friends and relatives, I was surprised and, as I said to before, overwhelmed. I took every single note home and read them again as I unwound from the week.

When teachers write about why they love their work, they use words like “meaningful” and describe the joy they feel when they see “the light go on” in kids eyes. I get that.

But I rarely hear teachers say how teaching a subject you love to appreciative students is just plain fun.

I will enjoy having a couple of weeks off. But I also can’t wait to start the next semester.

As soon as I signed a contract to teach sixth, seventh and eighth graders at an A+, A-rated public school in a middle- to upper-middle-class attendance zone, educator friends told me to prepare to deal with helicopter parents.

You know, the parents who expect to reach their kids by text message in the middle of class to remind them they have piano lessons. The ones who bring lunch and a sweater by and expect to deliver it right to the classroom. The ones who pick up the phone to complain about a child’s grade before a teacher has even had a chance to talk with the student.

Too anxious about their kids?

Newspapers, parenting magazines and education publications are filled with articles on the subject.

Helicopter parents are unable to detach! They suffer from too much anxiety, critics say.

Helicoptering is necessary! In an era when kids fall through the cracks in crowded schools and classrooms, moms and dads need to be advocates, proponents say.

In the 12 weeks that I have been teaching, I have seen parents who fall into both categories.

A few parents interfere so much I worry about the sense of entitlement and anxiety they are passing to their kids. These are the parents who have pressured their students into taking a high-school level class in middle school just so they can get a credit out of the way, who tell their kids they will lose their phone and internet privileges if their GPA falls below an A and those who tell me I made a mistake when correcting their child because the kid has never ever failed or been in trouble before.

I actually had one mom e-mail me the morning after a quiz demanding that her daughter be allowed a re-test. I was happy to respond that there was no need. The student had already earned an A.

Luckily these folks are a tiny minority. 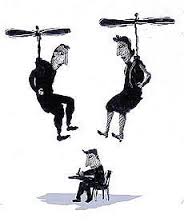 But others — and fortunately these parents are more common at my school — have a knack for knowing exactly how and when to get in touch about a concern. They also know just how to respond when I call or e-mail with a problem.

Early in the school year I had a close eye on one student who I knew had severe allergies that could be triggered in the classroom. The last thing I wanted as a brand-new teacher was to have a life-threatening health emergency on my watch.

When I noticed the student was walking around the classroom frequently and then got a low grade on the first quiz, I reached out to the mother to see if there was something else I needed to do.

At first she was defensive. Wandering? Could it be I had him mixed up with another student in my crowded classroom?

The helipad is open

Um no. I had my eye on this student like a mother robin watching a chick take flight.  I did not use those exact words, but she got the idea. She came in to talk.

It turned out that the student is gifted but sometimes lacks focus. He also gets stressed before tests. We worked on some strategies and built a partnership.

The other day, I had just returned a test to the student and encouraged him to come in and talk to me about what he missed. Minutes later I got an e-mail from his mother. “What do we need to work on?” she wanted to know. I smiled and answered her, explaining the plan.

Helicoptering? Yes, I would say so. Negative? No, not in the least.

For this mom and others, the helipad is wide open.